Home > Blog > What is the Impact of Artificial Intelligence on Software Testing?

What is the Impact of Artificial Intelligence on Software Testing?

The propagation of Artificial Intelligence (AI) as new technology has received worldwide recognition.  Although it’s not a new concept, the implementation of AI techniques across software testing has proven advantageous. It is interesting to know that, development teams across various platforms are switching to online and e-learning assets all thanks to AI.

However, the misery for QA Engineers at present is linked to surplus difficulties and time wastage while looking for a solution. The scope for making new additions or expanding existing new codes requires them to carry out fresh tests. It is a rigorous process and if planned manually, does overwhelm the QA experts.

This is where the usefulness of an AI-based testing approach comes into play. Such an arrangement can help identify changed controls skillful in comparison to manual efforts. Furthermore, the identification of even the slightest alterations with the algorithms can be observed by including AI in the process.

This write-up aims to highlight the vitality of AI testing towards software testing and how it will provide supreme assistance in the coming years.

Importance of AI for Software Testing

The future is untold but technologies such as AI have already given us a positive outlook about what comes ahead. Artificial intelligence is praised as a smart addition to software testing, with future innovations expected to drop more surprises. Below mentioned are some of the notable effects of AI on software testing which should be learned and acknowledged.

Finally, we mention some of the prominent benefits of AI testing which makes it a bonus inclusion for software testing:

It is a well aware fact that countless test lines are coded even by the most skilled application development companies.  Manual testing is not that efficient in maintaining speedy processing even after all efforts are put in place. Above all, functional testing tends to be expensive, thereby, consuming additional time and money.

The incorporation of AI testing is known to facilitate and address time-wasting issues. As a result, developers are relaxed when it comes to writing all scripts and investigating large chunks of data sets since they are now managed in a faster manner. Artificial intelligence is capable of sorting via log files, thereby, saves precious time and improvises programming accuracy. 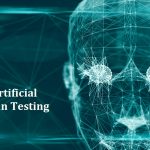 2. Assistance to Developers and Testers

The usefulness of shared automated tests can be reaped by developers for identifying problems before passing it on to QA. To be precise, tests can be executed automatically every time the source code variations are checked in. This also functions as an effective move to notify the team in case of a failure.

Software tests are repeated whenever the source code is altered. It should be understood that manually repeating such tests is indeed time-consuming and can also prove highly expensive. However, automated tests can be operated multiple times without any additional cost and at a quicker pace.

Some of the AI-based test automation tools include Appvance, Testim.io, etc.

As AI is merged with automated testing, it works to enhance the overall depth and scope of tests. Automated software testing can easily access memory, file contents, data tables, etc., for determining the working status of the software. On the whole, test automation is capable of carrying out 1000+ test cases related to each test run offering coverage that isn’t doable with manual tests.

The potency of AI testing and its collaborative actions under software testing is very well defined in this blog. As the testing arena is gaining strength and skill in this modern setup, the superiority of AI-based software testing operations will achieve a greater position in the near future. If you hold any queries related to the expanse of AI testing services, simply connect with testing experts at ImpactQA.

What is the Role of IoT & Machine Learning in Smart Cities?