Software testing industry is becoming extensive with every passing day. With the sudden boost in the technology challenges, apps are growing in complication which creates an incessant need for effective software testing. Software testing is the premeditated way where an app can be observed under definite conditions and where software testers can detect the risks involved in software implementation. Testing is an imperative process that guarantees customer satisfaction within an app and assists to safeguard against potential failures that may prove to be detrimental down the line. It is a planned procedure where the app is reviewed and analyzed under definite conditions to understand the overall risks and threshold involved in its implementation.

According to the State of Testing Survey 2017, the future is about the automated test as 62% of respondents believe it will boost in the next few years. According to the similar report, we can also expect testers spend extra resources and time on testing mobile & hybrid apps, with the time used on actual development shrinking. When it comes to automation tests, Artificial Intelligence is being extensively used in object app categorization for all user interfaces. Here, recognized controls are classified when you create tools & software testers can pre-train controls that are generally seen in out of the box setups. Once the hierarchy of controls is observed, software testers can create a technical map such that the Artificial Intelligence is looking at the HUI (Graphical User Interface) for obtaining labels for the diverse controls. 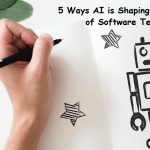 Simply said, Artificial Intelligence is the science behind computers performing significant tasks that are traditionally performed by individuals. It provides machines with the critical skill to process information about its conditions & learns to adapt to the changes and modifications. Machines are learning more rapidly than ever given the technology advancements. The computer is fed with a high amount of data to adapt as per a series of inputs so that it can recognize patterns and logic and as a result make an effectual connection between similar input & output pairs. It is all the way through machine learning that websites like Amazon and Netflix are able to bring targeted advertisements to their customers by using vast amounts of data based on the web pages the user searches. Machine Learning has to turn out a long way with people using it for driving cars without a human. Artificial Intelligence has become quite popular in the field of healthcare also as it is used to recognize high-end flaws and loopholes. As Artificial Intelligence begins to progress, technology experts around the world are finding means to leverage its potential in the software testing field as well. It is merely a matter of sometimes when training apps to be familiar with issues for agile and more efficient testing becomes a reality.

AI is one of the best choices for developers looking for speedy deployments with insufficient infrastructure. It is better to leave the arduous or strenuous work to the Artificial Intelligence-powered automation which leaves only 18-20% of the test work to human ingenious and cognitive ability. It would guarantee more fail-safe results as hand-crafted testing doesn’t just require long human hours but is also susceptible to imprecision’s and inconsistencies. Quite the reverse, Artificial Intelligence bots-based testing requires very less maintenance and is skilled enough to find out new trails through the product on their own. As industries realize the compensation of Artificial Intelligence and Machine Learning, developers are considering it to drive automation, facilitate decision making, and also perk up efficiency in the area of software testing. Machine learning and AI are unquestionably becoming vital components in Quality Assurance and software testing as well. By adding Artificial Intelligence to test creation, execution, and data analysis, expert testers can rapidly identify controls, spot links between defects as well as other components, and eliminate the requirements to continually update test cases by manual means. The biggest “A-ha!” moment for us is when we realized that the complications we solve with AI are not deterministic. Machine learning gives software testers the opportunity to better understand their client’s needs and respond more rapidly than ever to their changing expectations. Besides, testers now also need to analyze more data and they are given lesser time to do that, while their margin of error and flaws decreases constantly. Tools like machine learning and predictive analytics offer the amazing means to address these challenges, either with in-house well-versed tester’s teams or, turning to QA outsourcing providers. Either way, this approach is set to fill the gaps of traditional techniques of testing and make the whole process effective and relevant to the customer’s needs.