In today’s hyper-competitive business environment, organizations are constantly innovating to gain an edge in the market. Towards this objective, most organizations have adopted Agile and DevOps practices for delivering software. A common practice that has evolved much over the last two decades is automation of testing. Various tools and frameworks have evolved in these two decades with an intent to reduce the cost of automation as well as to popularize its use across various persona in the SDLC for enabling better collaboration and effectiveness.
One of the key challenges of test automation remained a lack of common understanding between the business analyst, manual tester, developer and automation engineer of what was being tested and how. Behavior Driven Development was introduced to bridge this gap and bring the domain expertise, business logic, and tests into a common framework comprising of a language based inputs and popular test automation tools. 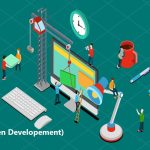 BDD primarily works with open source tools and technologies like Selenium WebDriver, Appium and other Java-based libraries for test implementation and support. In this approach, Gherkin language is a layer of abstraction which works on an implementation layer which in turn is integrated with the execution layer. Figure 1 depicts the high-level structure of the implementation.

Test scripts developed in BDD framework provides a clear picture of the behavior/flow of the system and applications under test, the input and its expected output.

BDD act as a test layer that can be easily integrated with any type of automation framework. Some of the popular tools like Cucumber provide support for both pre-defined steps and customized steps which can be directly used by the testers for scripting. The different BDD implementation tools available in the market support various types of programming languages like Java, C#, Ruby, Python, etc. which increases the potential of framework customization and adaptability.

Every tool and approach have its pros and cons. Careful consideration has to be given in selecting the right tools in order to be successful. Before making any decision on the BDD approach implementation it is always advisable to understand the application flows, features, behavior and the kind of testing that needs to be performed. There should be a thorough research on the fitment of BDD with the framework along with a proper design which makes the BDD implementation more successful.

In order to reap the maximum benefits of a tool or an approach, it is always advisable to follow its best practices.

Caution: BDD may not be the ideal framework in every situation. E.g. in case of scenarios comprising of the very large number of test steps, BDD framework could result in increased test script maintenance. It is always advisable to externalize the test data from the test scripts and the code implementation. Hence the feature file’s test data management feature is not recommended if the test data is huge.

If you have an existing product and you want to automate a large set of regression tests, (re)writing these as feature files using Gherkin syntax and parsing them in your framework would not add much value as the feature is already developed.

If the test case scripting in BDD form is not carried out in a controlled or disciplined way, it might lead to certain problems like duplication of steps which would result in the unmanageable and confusing framework. Some of the features of Cucumber (commonly used to implement BDD framework) are mentioned as below:

The Benefits of BDD

At ImpactQA, we have recently implemented BDD for automation in several projects and customers are reaping the benefits listed above. For any questions or comments, please reach out to us at services@impactqa.com