The act of creating automated tests associated with software applications has been forcing testers for ages to comprehend and structure codes in different programming languages. However, in this fast-paced world, as the software is launched in shorter iterations, it is necessary the development and testing operations must be quick and precise. Getting the scripting started from level one every time you wish to structure an application is a tiring process, which can even cause a delay in the release date.

Codeless testing is one of the smartest solutions to this problem. It is a useful version of automation testing that permits the swift creation of automated test scripts. Such action is fulfilled either with minimal coding and record-and-playback tools or at times without actually framing any code. It is important to note that, almost a majority of the tools used for codeless automation help in providing a graphical user interface in sync with a built-in testing framework. This is highly advantageous for the users since they can record vital actions and ensure an agile development action for the test automation suite.

Codeless automation testing can easily eradicate the need for prior scripting. Therefore, testers can now conveniently concentrate on testing activities and not put in extra effort towards the creation of test scripts. The structuring of automation with visual UI workflows permits all codes to be generated within the same shelter. This makes automation simple to learn with active implementation. In simple words, a tester can initiate automating cases as soon as the UI development gets accomplished. Such a process works to save significant time and resists complex coding frameworks.

The combination of automation tests with visual UI workflows merged with current business standards makes it easy to maintain and scale test automation. For a majority of occasions, it is not necessary to fine-tune the automation flows whenever the system undergoes test changes. Furthermore, automated flows can simply be pooled into reusable components that can be used as sub-flows concerned with diverse test cases.

With the joining of a shared solution and Center of Excellence setup, it does become easy to convey knowledge, test cases and suitable practices across projects for fruitful associations. The time required to start fresh automation projects gets reduced by the incorporation of shared test automation flows and components.

5. Ease Up Resources for Improved Testing 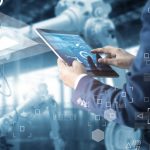 As we have discussed the perks and leading features of codeless automation testing, let us now try to highlight some significant disadvantages that need not be ignored.

As soon as everything is accomplished in the background through automated design, there is almost no scope for testers to modify the scripts. Therefore, it makes the testing outcome completely rely on automation tools.

Under codeless automation testing, although the scripts are structured automatically, there might be some of the other requirements towards manual coding. Therefore, testers must be ready with the knowledge and skill to frame basic scripts.

These days, most codeless testing tools can be acquired from the internet. Hence, getting your products tested using these tools the developer needs to share the file using a common IP address. This function makes the product easily accessible to the public.

Hyperautomation: The Future of Test Automation