The adoption of test automation has experienced a significant upsurge. This can be accredited to the growing dependency of organizations to test applications and other systems regularly.

But, surprisingly, not many companies have ranked successful in reaping supreme benefits out of test automation. The presence of errors within the test automation space can be seen as a major roadblock for most enterprises. After discussing with professional experts and consultants, here are 5 common mistakes associated to test automation together with methods to correct them.

There is no doubt automation is seen as a convenient method to augment testing efforts. However, enterprises and test experts consider it a replacement to manual testing and therefore fail to achieve adequate testing and coverage. Preferably, automated testing is viewed as a method over manual testing. 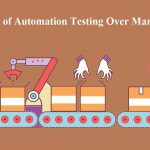 Prepare a checklist of features that can be automated for testing. For instance, you can test a web page which consists of incoherent fonts. Under this, you should automate only that part of a script that analyzes errors within the fonts.

The use of record and back for framing test scripts is managed by most testers.  However, the record characteristic needs to be viewed as a step to create a skeletal script. In simple words, a successful automation testing requires customization of the generated script.

Script Customization covers data parameterization, that is, the inclusion of checkpoints for substantiation. Further, it can also involve script modularizing for permitting several testers to operate at a particular time.

Enterprises and test engineers often make use of test scripts that hold no validation. There are cases where test scripts do require validation for carrying out a certain action. For example, the test automation of a website that possesses a login page. In this scenario, you need to validate whether or not the login has been successful.

Script validation can be done by using checkpoints. Checkpoints help detect web objects, page parameters, or perhaps some text on the page. Checkpoints should be placed at as many points as possible.

Another issue is when testers are only confined to validate visible objects and avoid other elements during application testing. It is quite clear that validations should never be limited to visible elements like buttons, page text, etc.

Do provide validations that highlight the completion of the process. For instance, if you are managing an order entry system for placing an order, it is a primary requirement to query the database for ensuring the order was successfully saved.

Test automation is not at all a simple task. Similar to numerous other aspects of software development, test automation is iterated on and maintained as time passes. It is quite common to see teams roll out test cases with a purpose to communicate the message that the automating process is completed. With the evolution of particular software, there is surely an upgrade within the test cases as well as the automation code.

The reality is many testing experts dealing with test automation don’t find the need to maintain automated scripts. Many of them are known to completely overlook maintenance for longer periods. The repercussions of such a decision lead to deteriorating test automation performance, code coverage, and software quality.

Do update unit tests along with automated testing scripts once the software starts to evolve. Furthermore, do not avoid the task of revising automated test scripts. It is surely a fruitful action to plan out dedicated time towards the maintenance of automated tests.

There is no denying the fact that the majority of the testers or QA companies might have faced one or many of the above-mentioned mistakes. This write-up presents a precise solution to issues circulating test automation for improving testing efforts. It is recommended not to be ignorant and get in touch with software testing professionals to impart additional knowledge and assistance. You can connect with skilled testers at ImpactQA who can deliver the right automation testing services to test automation concerns.

Hyperautomation: The Future of Test Automation