For the success of your software product, it is important to check on the effectiveness of the testing process put in place. The competition in the software testing arena is indeed cut-throat and requires a smarter approach. These days, the inclination is fairly higher towards artificial intelligence as several leading testing enterprises have understood its potential to simplify complex tasks in lesser time.

These days, AI and software testing together are viewed as a supreme set that brings in better control and precision. It has been concluded by industry experts that a software testing company abiding an AI structure is capable of offering better learning and methods of self-correction. Since AI is directly dependent on Machine Learning (ML), it enables you to equip machines to act without being openly programmed.  Since 2014, the number of companies providing artificial intelligence in software testing has significantly increased. This trend was brought in by a majority of start-up companies. But gradually several established and popular software testing enterprises have supported AI-driven testing for creating a global noise.

Role of AI in Software Testing

According to testers, the usefulness of Artificial Intelligence for amalgamating human and machine-level testing efforts needs to be realized. Moreover, several other factors should be understood that directly support the implementation of AI in QA testing; such as:

With modern testing methods gaining popularity, manual testing is seen to be slow and costly. As a solution, AI is actively deployed because it automates different test processes. Such an action supports continuous testing and also increases its pace and precision. Furthermore, AI tools assist you in recognizing the number of tests required for investigating the changed code.

The best part about AI-driven testing is its effectiveness to test the user interface and its various contents. Under normal circumstances, these tests can be difficult to automate and might require human involvement. However, the deployment of an AI-based tool for visualization, you can easily spot disparities within images that are nearly impossible to be caught by the human eye. In addition, AI testing also reduces the manual effort to update the DOM or Document Object Model.

The detection of bugs using conventional methods might turn into a tricky task. However, AI and machine learning in software testing can quickly tract defects within seconds. The power of artificial intelligence allows you to assess major errors quite efficiently. As a matter of fact, AI tends to automate testing processes thereby auto-correcting the codes and even determining duplicate defects.

The automation of test scripts with AI occurs automatically with the help of the AI algorithm. Moreover, AI converts test cases to become more reliable. Since AI is brought into the scenario, test scripts evolve to achieve self-learning abilities. It is analyzed that AI can expediently receive mock responses directly from the server. 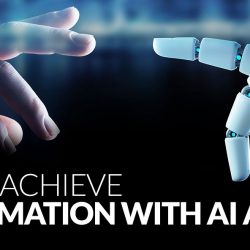 5 Great Ways to Achieve Complete Automation with AI and ML

The importance of AI can be judged by increased test coverage that simultaneously improves the functioning of the software program. AI can easily examine files, data tables along with overall memory segments. On the other hand, AI-driven test automation supports the running of a thousand test cases under a single test run! This is extraordinary and therefore makes AI quite essential for software testing processes.

At present, one of the prime issues with software testing is the phase of over-engineering results that can lead to loss of time and effort. It has been observed that companies aim to manage quick releases with the help of automation, but later struggle to cope up with the significant backlog. With the help of artificial intelligence, you can eliminate the backlog and improve the level of concentration towards the designated tests.

In addition, there is a bright future in terms of AI-powered testing stages for identifying changed controls. Technology experts are working towards the introduction of stable updates with the algorithms to carry out the identification task with higher precision.

AI has fastened the pace of software testing and is expected to do more wonders in the near future. To know more about AI and its impact on software development & testing, do connect with experts at ImpactQA. These professionals will carefully update you about the benefits of AI on software quality, optimization, and other important facets.

Ideal Qualities to Look for in Modern Testers