With the growth and demand of Mobile applications, there is growing competition in the marketplace and performance has a great impact on the app’s reliability and dependability. Therefore, there is a high requirement for performance and load tests with suitable blueprint and execution. In general, performance testing validates the scalability, stability, and speed of the applications. This is significant for providing an ‘Amazing’ and ‘Ultimate’ experience to the users.

What is the Need for Performance Testing?

To ensure the stability, speed, and accuracy of the software.

The Performance test is critical to authenticate the scalability, reliability, and responsiveness features of the software under test.

A software application should be thoroughly tested with accurate testing processes before releasing to the customers. Like any other testing procedures, this type of testing also comes with a number of Challenges. 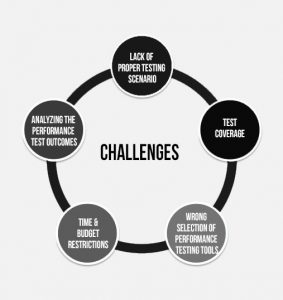 Performance testing requires you to test the application under reasonable scenarios using performance testing tools. However, lots of times the enterprises do not have the budget or environment for executing the tests. One of the most efficient ways to conduct performance testing is to generate a replica of the production environment. Yet, the challenge lies in getting the proper outcome with limited resources and uneven scenarios. For example, creating a scenario where multiple users log into the system at the same time is hard.

There is countless consideration before moving further on with such type of testing. They comprise:

To design a comprehensive test strategy does require a lot of effort. In fact, you need to identify and setup project risks for deciding different actions to eliminate them. To be precise, the testing process covers the identification of application performance traits, planning of appropriate tests, testing API services, and analyzing whether or not these services are operating as per the test strategy. Lack of creativity at the time of test coverage can directly hamper performance test results.

We can see it as a common challenge as in most cases the appropriate performance testing tools are not selected. It needs to be realized that tool selection relies on a number of factors and each one needs to be taken into consideration. In case we select a wrong tool, chosen, it can lead to an extension in testing days in order to properly execute the test scripts. Always remember that the chosen performance tool should be capable of recognizing the controls of the specific application under test.

To execute load testing it does require time and budget for achieving satisfactory results. If you are not following proper planning throughout the software development life cycle, there are strong chances your budget resources will face a setback. Hence, dependency on low-skilled resources increases, thereby, adding to the list of challenges in the performance testing projects.

This is indeed one of the significant and trickiest of the challenges for Performance testing. A good amount of judgment and thorough knowledge of the system is necessary to examine the several performance result reports besides the tools used for the actual tests. A skilled tester should be able to judge the scenarios and if the test is done or not. The tester should be able to continuously refine the tests and keep adding tests consistent with the situations estimated during the course of time.

Micro Focus ALM & its Benefits to an Enterprise